Search
Bible Verse
Therefore, if anyone is in Christ, the new creation has come: The old has gone, the new is here!
2 Corinthians 5:17
Important Links
Fun Things
Prayers 4 You

What Is The True Meaning of Christmas 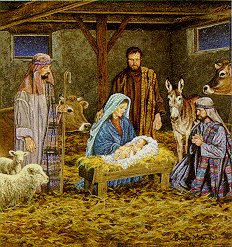 What Is The True Meaning of Christmas

Christmas is a time of peace, love, joy, and happiness. It’s when we celebrate the birth of our savior, Jesus Christ.
As it says in John 3:16,

“For God loved the world so much that he gave his only Son, so that everyone who believes in him may not die but have eternal life.”

But many of us think of Christmas as a different time; one of exchanging gifts that are placed under a pine tree. It’s a time of year that has become so commercialized that it has become the busiest and most profitable time of year for  merchants. In fact, many stores gauge their monetary success for the time between Christmas’s; the more sales during the Christmas season, the better they will do during the rest of the year and the months before Christmas the following  year. In other words, Christmas has become an indicator of the success they hope to have during the non-Christmas months.

The jolly man dressed in red riding a sleigh driven by eight reindeer is a symbol of Saint Nick, or Chris Kringle, known to  us in the United States mostly as Santa Claus. Santa was invented in Germany during the 7th century. He has survived for many decades, and has been pictured in infinite ways on infinite products. It has helped to turn Christmas into a time of commerce to buy products and give them away to others.

But this custom isn’t all bad in that it’s impossible to give gifts to Jesus Himself, so we give gifts to ourselves instead because since God is inside all of us, it is like we  are giving to Him to celebrate the most important birthday of the year.

The pine tree was chosen as part of our ritual because, since it stays green year around, it symbolizes ever lasting life.  That’s what Jesus promised and gave to us through His crucifixion and death. Everlasting life so we can get into God’s Kingdom of Heaven. This is what Christmas is really about, worshipping Jesus in thanks for His greatest gift to us.

As long as we believe in Him, live our lives for Him and according to the Scriptures, we are promised everlasting life and peace living among the angels in paradise. It literally  means our very salvation from sin and our means of entering Heaven through Jesus Christ. All of this being much more important than we can imagine. Our Savior was born to us, and that is the most precious gift we could ever receive.

“An angel of the Lord appeared to them, and the glory of the Lord shone around them, and they were terrified.  But the  angel said to them, “Do not be afraid. I bring you good news of great joy that will be for all the people.  Today in the  town of David a Savior has been born to you; he is Christ the Lord….”

This Christmas, lets remember the true reason of our celebration, and give thanks for what has been given us. The world is becoming a place filled with turmoil and fear, with governments trying to control their people through oppression and unjust laws. Jesus  warned of these times, and others that are still to come, but we were told by Him to have faith in Him and therefore we are not to fear as He is in control. God through Jesus, not Santa, holds the reins of those reindeer and is guiding the sleighs path;  all we need to do is follow.