Search
Bible Verse
Do not wear yourself out to get rich; do not trust your own cleverness.
Proverbs 23:4
Important Links
Fun Things
Prayers 4 You 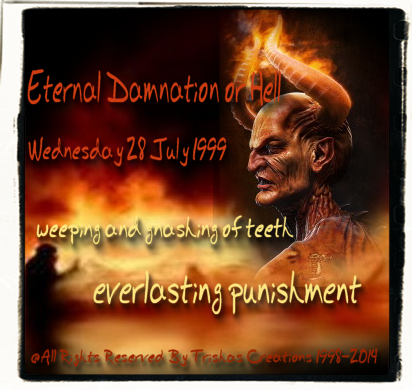 I know some of these on “Hell” are old, but I was going through my Folder I have called “Bible“ things which I did research on and have saved for this website. I came across some things which may be of interest to you. I am not a Catholic, my sister who passed (June 19th 2014) she was. But I received these in email to a group I belonged to and “oh, how I miss the aol groups I belonged to” they was so fulfilling.

1. God is the infinitely good and merciful Father. But man, called to respond to him freely, can unfortunately choose to reject his love and forgiveness once and for all, thus separating himself for ever from joyful communion with him. It is precisely this tragic situation that Christian doctrine explains when it speaks of eternal damnation or hell. It is not a punishment imposed externally by God but a development of premises already set by people in this life. The very dimension of unhappiness which this obscure condition brings can in a certain way be sensed in the light of some of the terrible experiences we have suffered which, as is commonly said, make life “hell”.

In a theological sense however, hell is something else: it is the ultimate consequence of sin itself, which turns against the person who committed it. It is the state of those who definitively reject the Father’s mercy, even at the last moment of their life.

The New Testament sheds new light on the condition of the dead, proclaiming above all that Christ by his Resurrection conquered death and extended his liberating power to the kingdom of the dead.

Redemption nevertheless remains an offer of salvation which it is up to people to accept freely. This is why they will all be judged “by what they [have done]” (Rv 20:13). By using images, the New Testament presents the place destined for evildoers as a fiery furnace, where people will “weep and gnash their teeth” (Mt 13:42; cf. 25:30, 41), or like Gehenna with its “unquenchable fire” (Mk 9:43).

All this is narrated in the parable of the rich man, which explains that hell is a place of eternal suffering, with no possibility of return, nor of the alleviation of pain (cf. Lk 16:19-31).

The Book of Revelation also figuratively portrays in a “pool of fire” those who exclude themselves from the book of life, thus meeting with a “second death” (Rv 20:13f.). Whoever continues to be closed to the Gospel is therefore preparing for “eternal destruction and exclusion from the presence of the Lord and from the glory of his might” (2 Thes 1:9).

3. The images of hell that Sacred Scripture presents to us must be correctly interpreted. They show the complete frustration and emptiness of life without God. Rather than a place, hell indicates the state of those who freely and definitively separate themselves from God, the source of all life and joy. This is how the Catechism of the Catholic Church summarizes the truths of faith on this subject: “To die in mortal sin without repenting and accepting God’s merciful love means remaining separated from him for ever by our own free choice. This state of definitive self-exclusion from communion with God and the blessed is called ‘hell’ (n. 1033).

“Eternal damnation”, therefore, is not attributed to God’s initiative because in his merciful love he can only desire the salvation of the beings he created. In reality, it is the creature who closes himself to his love. Damnation consists precisely in definitive separation from God, freely chosen by the human person and confirmed with death that seals his choice for ever. God’s judgment ratifies this state.

4. Christian faith teaches that in taking the risk of saying “yes” or “no”, which marks the human creature’s freedom, some have already said no. They are the spiritual creatures that rebelled against God’s love and are called demons (cf. Fourth Lateran Council, DS 800-801). What happened to them is a warning to us: it is a continuous call to avoid the tragedy which leads to sin and to conform our life to that of Jesus who lived his life with a “yes” to God.

Eternal damnation remains a real possibility, but we are not granted, without special divine revelation, the knowledge of whether or which human beings are effectively involved in it. The thought of hell — and even less the improper use of biblical images — must not create anxiety or despair, but is a necessary and healthy reminder of freedom within the proclamation that the risen Jesus has conquered Satan, giving us the Spirit of God who makes us cry “Abba, Father!” (Rm 8:15; Gal 4:6).

This prospect, rich in hope, prevails in Christian proclamation. It is effectively reflected in the liturgical tradition of the Church, as the words of the Roman Canon attest: “Father, accept this offering from your whole family … save us from final damnation, and count us among those you have chosen”.

To the English-speaking pilgrims and visitors, the Holy Father said:
I am pleased to greet the English-speaking pilgrims and visitors present at today’s audience, especially those from England, Scotland, Nigeria, Hong Kong and the United States of America. I wish you a pleasant visit to Christian Rome and I invoke upon you the grace and peace of our Lord Jesus Christ.