Search
Bible Verse
Let your gentleness be evident to all. The Lord is near.
Philippians 4:5
Important Links
Fun Things
Prayers 4 You

What’s In Your Name? 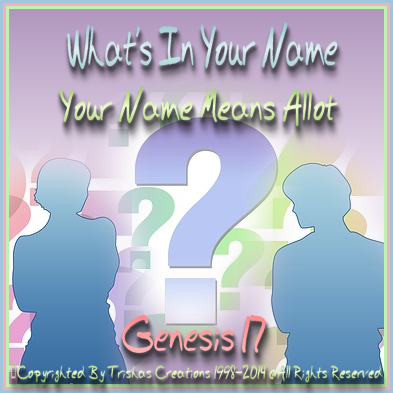 In Genesis 17, tells us that there must be and is a meaning to names. During the Bible times they do mean allot to people. Bibles names meant and described a person character. They were very important.

God gave Abram and Sari new names – He was making changes in their lives, He wanted to give new names to show and declare what He was doing in and through them.

Abram and Sarai knew the importance of names, and they understood the significance’s of why God was changing their names. God was putting the beginning of the nonexistent things, as though they already existed. (Romans 4:17) The name change of Abram and Sarai that God was beginning to fulfill His promise to them when He promised Abram. “Love toward the heavens and count the stars – if you are able to number them. Then He said to him, so shall your descendants be.” Genesis 15:5

There is allot of meaning to names, then we think! Sarai, she was a barren woman, who probably had a poor self image of herself. In bibles time society, so much of a woman’s worth depended on her ability to have children. She was old and biologically, she had no hope of being able to have children. But God had his perfect plan.

God changed her name to Sarah. Sarah means, “princess”. So when Abraham or any one else called Sarai by her new name, Sarah, they were helping her change her image of herself. They were calling her beautiful, valuable, Kings daughter they was speaking forth the image of the Mother God had made her to be. She begun to see herself differently. She must of felt the faith rising up in her heart. She began to know God would and is going to keep his promises.

Abram must have had to go under his own transformation he had his won faith when God changed his name to Abraham, means, “Father of a multitude.”

So, when you think about names and their true meaning, think of the “Name of Jesus” because his name is Powerful, loving, caring, filled with life is, all who he claims to be, all who He will always be, and all He has Done and, if you let him he will change your life, and your circumstances.