Search
Bible Verse
Start children off on the way they should go, and even when they are old they will not turn from it.
Proverbs 22:6
Important Links
Fun Things
Prayers 4 You

Discouraged Shake It Off 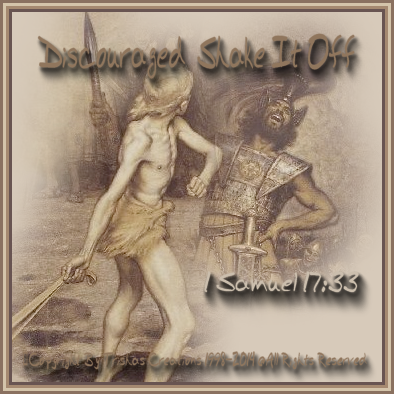 Discouraged  Shake It Off

David, volunteered to go and fight the boastful giant the Philistine, Goliath. He wasn’t listening to those who was trying to discourage him.

He kept being told that he wasn’t big enough, that the giant was much bigger than he was.

But, David remembered and recounted all the times God helped him become victorious in the past, so he was very confident he was going to smite goliath.

Everyone was telling him, he was too young and he didn’t have the right Armor. But David showed them he was going to do it, with God’s help.

If, we want to do something for God, we have to understand and be encouraged that no matter how many times we have to keep on, no matter if it’s hundreds or thousands of times trying we will keep on and not get discouraged.

As for me creating this website, the devil keeps causing computer problems and issues, so I cannot get this website done, he knows I am headed for a victory and he knows it. I have had so many computer problems, viruses, that are not detected which causes so much havoc, and even though no matter how many times I have been up against the wall, I’ve made myself climb back and down and continued no matter how many times  the devil tries to discourage me –– I refuse by The Blood of Jesus and His help and courage I am going to proceed. Jesus is on my side, and there is nothing the devil can do about it.

I have been sick allot, and times where I cannot work on it, or my body just has no energy, but I do try and that makes the devil angry and mad. Satan, will come against those who want to do for God, and he knows to do for God we have to have courage to be able to go forward to get things done.

He knows, God’s plan for us is a Victory and the devil knows he can tempt us, confuse us, discourage us, and we will end up stop trying. Never stop trying, keep asking God to help you, to always have courage and to always seek His Face and Kingdom.

DO not listen, to those who keep telling you , you can’t do it, you can’t get it done, you don’t have enough time, don’t listen to the devil or the ones the devil is using to make you quit. Keep on Keeping on, because the VICTORY will be your’s and God gets the Glory!

When the devil tries to stop us, shake the discouragement off and don’t stop because you may have some stumbling blocks which tries and does get in your way, just pray and ask God to take them down so you can finish what He wants you to do.

Because with God we can conquer, we can WIN, we can have the Victory which the devil wants so much for us to miss!

Have Courage, Conquer, Have faith Because God’ is with you and He wants you to enjoy the Victory He has for you!

When David, looked at the giant, he could’ve gotten really discouraged, but he didn’t, he ran towards him quickly towards the battle line. David, had to have known that if he had thought about all the discouragement which he was told by other’s he wasn’t going to be able to kill the giant.

But, David had courage and he wasn’t going to back down, he didn’t run away he immediately took action against the giant.

Just as we must do, when we start to get discouraged we need to continue to stand firm, run quickly to our deed that we are doing for the Lord God and finish it, get it done don’t back down, no matter how many times or obstacles come in our way. God’s grace will be right there with us, so we don’t procrastinate!

So many put things off and refuse to go forward, because they get discouraged, I used to be this way, but only because I am always having computer issues, or staying sick all the time. But, we have to Trust God, and believe in God and His mercy and His Grace! God will help us through, He will give us His Grace and favor!

Those who wait for the right time, will be waiting a long time, because the right time never comes. God will give you all the encouragement you’ll ever need, just go forward –– stop the devil in his tracks and show him you are going to do it, and he can’t do nothing about it. Show God He can depend on you!