Search
Bible Verse
For the Spirit God gave us does not make us timid, but gives us power, love and self-discipline.
2 Timothy 1:7
Important Links
Fun Things
Prayers 4 You 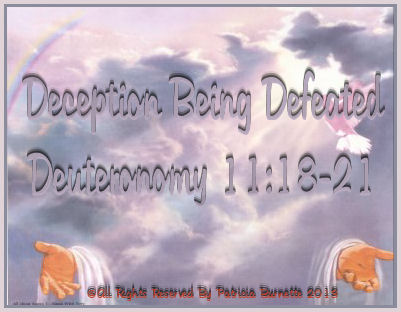 God had told the people to write His words on the doors of their houses, on their gates, on their foreheads, on their hands.

They were to let the word permeate their inner being, no matter whether they were sitting, or laying down, walking around, there was a reason why God wanted them to do this.

God was aware that knowing the word keeps a person from having or being deceived and their hearts. Jesus taught this in John 8:31,32, when he said “If you abide in my word (hold fast to my teachings and live in accordance with them” you are truly my Disciples, and you will know the truth, and the truth will set you free.”

If all we care more about all we have to do or get done everyday, more than keeping close to the Lord and reading the Word of God, then you are going to be in serious trouble, because we are living in the last days, and they are so very close.

Just because you go to church, spend time with the fellowshippers, and maybe listening to gospel music, doesn’t and isn’t enough to get us through. We have to be serious enough to stop thinking we know enough, not to be deceived. If, you thought that or you are thinking, then you just deceived yourself again.

Look we all can go to church, we can go and fellowship with other’s and we can listen to gospel music all day and night, but unless we know what God’s word says and believe in it, speak it, memorize it, hold it, in our hearts and minds, we can and will be easily deceived.

Deception happens when we believe a lie, the lies of satan to continually without realizing we are so deceiving ourselves. Without the thorough knowledge of God’s word, we don’t recognize the lies which the devil wants us to believe, his entrapments of his lies.

People now days have become so gullible to be deceived by themselves by reasoning with themselves and those lies of the devil when he comes in sheep clothing. We have to surrender, we have to read the Bible and Pray and ail God to show us the truth and He will even reveal to us the lies which we have believed in for so long.

So many people makes so many excuses to stop them from doing what God wants them to do, there are so many which have been so deceived for so long, and they have believed so many lies which the devil has put into their minds and in their hearts it’s so sad to see that this is one reason the world is in such a mess, by the lies people has been fed and believed, and they are not sure how to get out of the trap that they have gotten themselves into.

That’s called “SPIRITUALLY DEAF” to the voice of the Lord!

A deceived heart will not do for leaders, or for anyone which intends to be victorious in their life. We all should be the kinds of people to root out the areas in our lives where we are so very susceptible to being deceived.

We all need to live openly, honestly, abiding in God and His word, His truths, His will, His Love His kingdom, His will will reveal His word and truth of His word.