Search
Bible Verse
But because of his great love for us, God, who is rich in mercy, made us alive with Christ even when we were dead in transgressions—it is by grace you have been saved.
Ephesians 2:4-5
Important Links
Fun Things
Prayers 4 You

Rebellion, And God’s Word On It 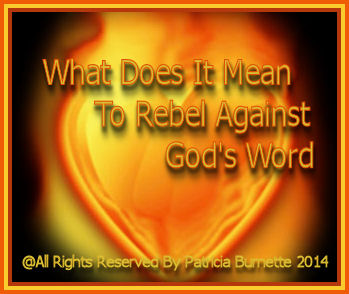 What Does It Mean To Rebel Against God’s Word

Rebellion, have you rebelled against your parents when you was growing up, I’m most of us did, at one time or other. Rebellion, is a common thing now days with children and yes even grown ups, and they actually think it’s cool. NOT!

Let’s see what rebellion, actually means for those who are really not sure:

An act or a show of defiance toward an authority or established convention.

Rebellion, And God’s Word On It

The rebel rejects the expectations, rules, and power of the organization or individual holding authority.

Rebellion can be good, as when we rebel against unjust or sinful societal pressure. Rebellion is like a great tug-of-war; the authority figure holds one end of the rope while the rebel pulls on the other. The picture changes dramatically if we imagine the rebel’s feet being mired in quicksand. Such is rebellion against God. God pulls on the rope, not to ruin our lives, but to lead us toward safe footing.

What Does It Mean To Rebel Against God

Numbers 20:1-13 . . . You did not trust me enough to demonstrate my holiness to the people of Israel.

Moses rebelled when he disregarded God’s instructions for his leadership.

Jeremiah 1:16 . . . They worship idols that they themselves have made!

Matthew 6:21 . . . Wherever your treasure is, there your heart and thoughts will also be.

We rebel against God whenever we give our devotion to other things
Judges 2:11-14 . . . Then the Israelites . . . abandoned the Lord . . . They chased after other gods, worshiping the gods of the people around them.

Sin is rebellion against God, wanting to do things our way. When we rebel against God we become separated from him

1 Samuel 12:14-15 . . . If you rebel against the Lord’s commands and refuse to listen to him, then his hand will be as heavy upon you as it was upon your ancestors.

Rebellion is refusing to listen to and obey God

Ezekiel 20:13 . . . They wouldn’t obey my instructions even though obedience would have given them life.

Hebrews 3:7-15 . . . Be careful then, dear friends. Make sure that your own hearts are not evil and unbelieving, turning you away from the living God.

No matter how far the rebel strays, God still loves him or her with an everlasting love.

Is Rebellion Ever A Good Thing

When under pressure to participate in sinful activities, the Christian is to rebel against the crowd

Jesus himself rebelled against the systematic corruption of the Temple

YOUR PROMISE FROM GOD:
Jeremiah 3:22 . . . Come back to me, and I will heal your wayward hearts.
God is always calling us back to him.