Search
Bible Verse
Therefore he is able to save completely those who come to God through him, because he always lives to intercede for them.
Hebrews 7:25
Important Links
Fun Things
Prayers 4 You 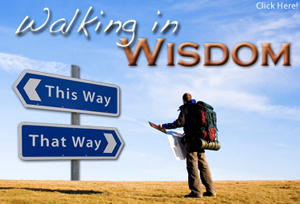 This Old Testament literature deals mainly with the idea of wisdom. These include Job, Proverbs, and Ecclesiastes, and parts of the Psalms (such as Psalms 1, 32, 34, 37), and prophets (the parables of Isaiah).

In the Greek Old Testament (and the English Apocrypha), two additional books of wisdom are found. There are Ecclesiastics, a second-century BC work written by Jesus ben Sirach, and the Wisdom of Solomon, an anonymous work written during the Hellenistic period (when the Jews were conquered by the Greeks).

Old Testament wisdom literature begins with Proverbs. Its wisdom has to do with morality—the knowledge of how to live well—not with high-flown speculation on the nature of reality.

The starting point for all wisdom is the reverence (or “fear”) of God. The book tries to show us the basic rules of good behavior—integrity, discipline, justice, and common sense—and the failure that awaits the fool. Its wisdom was designed to be memorized by the young, who were educated at the feet of the wise men.

For those who learned these truths by heart, the wisdom of the proverbs served as a moral and spiritual guide throughout life. There is a way to live successfully, a way governed by rules of right and wrong. The authors of Proverbs wrote to advise us how to live this life, the good life that followed the wisdom of the Creator of all life.

Thus, the wise men of the proverbs were guides, in both their teaching and their writing; they did not build ingenious philosophical theories but communicated simple, practical wisdom on how to live. Wisdom is “more precious than jewels, and nothing you desire can compare with her.

Long life is in her right hand; in her left hand are riches and honor. Her ways are ways of pleasantness, and all her paths are peace” (Proverbs 3:15-17, RSV).

ECCLESIASTES reflects the wisdom of a man who had lived long and seen the world from all perspectives. His faith was not the superficial, shallow faith of one who lived easily and believed lightly. The author of Ecclesiastes had seen that the righteous do not always prosper nor do the wicked always suffer. Too often the righteous suffer with no relief from their suffering, and the wicked enjoy carefree lives.

The writer of Ecclesiastes sought justice, but as he observed the world through honest and objective eyes, he did not see that justice was always done. More than justice, he sought truth, but even truth in its ultimate perspectives eluded him. All was vanity, a grasping after the wind! Yet for all the negativity of Ecclesiastes, it is a magnificent monument of faith, a faith that held on to God despite the agony and pointlessness of a world filled with evil and vanity.

This wise man could not soar with hope as the prophets did, but he could hold on to the fundamental truth of God when all else, including his ability to understand, failed. So the book of Ecclesiastes may become a close friend to those who see the world as it really is, in all its agony and apparent vanity. JOB While the writer of Ecclesiastes described the grief and sadness of the world from the perspective of an observer, Job described these things from within.

Job describes a man who knew and lived the kind of practical wisdom reported in the book of Proverbs, but had an experience that called it all into question. He lost his possessions, property, prestige, children, and health—and with the loss of his world, his wisdom seemed lost too. Job questioned the very beginning of all wisdom, God himself.

Such are the radical questions this book asks, and there are no simple answers. Yet in the great climax of the book of Job, namely, the encounter between God and Job (Job 38-42), wisdom is set in its proper perspective. There remains always a mystery in God and in God’s ways that lies beyond the grasp of the human mind.

Wisdom pursues the knowledge of God, but wisdom can never fully grasp it, for God is always greater than the human mind. Yet while Job’s questions were not answered, they were effectively removed; Job is forever changed by his encounter with God.

Thus, the ultimate wisdom lies not in finding an answer to all of one’s questions, but rather in the encounter with the living God. OVERALL The teaching of the wisdom literature has many dimensions and puts together many perspectives on truth. There is a basic knowledge and goodness that is vital to successful living, and it must be taught to the young as their basic rule of life.

But this wisdom does not explain away all problems, as Ecclesiastes shows us. Life and the world may even seem pointless, but the truth of God and reverence for God must be held fast by the heart in the face of radical doubt (Ecclesiastes 12:13-14).

Wisdom reaches its limits in the book of Job, and points beyond itself: humans cannot always find answers to the questions, but the experience of the living God can make those questions irrelevant.

CONCLUSION The teaching of the Wisdom Literature has manifold dimensions and in its totality is a compound of the various perspectives on the truth contained in Proverbs, Ecclesiastes, and Job.

There is a fundamental knowledge and morality that is vital to proper and successful living and that must be communicated to the young as their basic rule of life. It will lead not always to material prosperity but to that more profound prosperity that transcends adversity—the prosperity of the person whose life is lived in reverence of God.

With the passage of time and advancement of years, there comes to those educated in conventional wisdom the understanding that life and the world are not so simple. Faced with the temptation to jettison conventional morality and wisdom, a person may find that the more worldly wisdom of Ecclesiastes provides an anchor.

Life may seem pointless, the world may seem to be essentially a place of vanity, but the truth of God and reverence for God must be maintained in the face of radical doubt (Ecclesiastes 12:13–14). To those who experience in some fashion the plight of Job, wisdom reaches its limits and points beyond itself; humans cannot always find an answer to the questions, and the last resort is simply the experience of the living God.